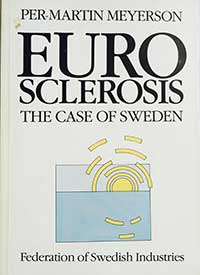 Characteristic of Western welfare societies is that an increasing percentage of GDP is being channeled through public-sector budgets. Decisions regarding the allocation of resources and income have thereby become politicized to a growing extent. The climate of competition found in a dynamic market economy has increasingly been replaced by public-sector monopolies and various types of regulation. This has created inflexibility in these economies – ”sclerosis”.

This trend has been particularly obvious in Sweden. During the 1970s it adversely affected the very heart of the Swedish economy – industry.

This book describes and analyzes the interplay between economics and politics which has resulted in the current Swedish welfare state model, critically examines its consequences and indicates some changes which are necessary to improve the vitality of the Swedish economy – thereby ridding it of its ”sclerosis.”