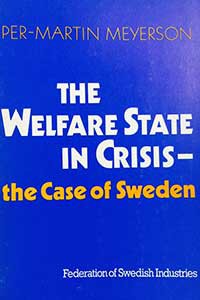 Socially advanced market economies have their critics. For many years, the ”Swedish model” was a disturbing phenomenon to these critics. For a long time, the Swedes managed to combine a high economic growth rate with a relatively rapid leveling out of social-welfare differences. The forces in welfare states, which, according to these critics, become increasing long-term obstacles to growth have now also begun to operate in the Swedish economy. Because of a rapidly growing public sector and a high tax burden, we are now destroying the very basis of our prosperity.

Events in the 1970s showed that in the long run, capitalistic allocation of resources cannot be reconciled with socialist-inspired distribution of wealth. The dividing lines between the Socialist and non-socialist blocs i Swedish politics became sharper. Thus, for example, the non-socialist parties are now campaigning for a revitalization of the market economy and a return to the conditions that produced the ”Swedish model,” while the Social Democratic party is campaigning on a proposal to create collective employee investment funds that will buy shares in companies. This proposal has been formulated as a springboard to a socialistic economy and thus implies an entirely new economic model.

This booklet descibes and analyzes the latest trend away from consensus and toward greater confrontation in the Swedish economic and political system.